The war film, 1917, has received rave reviews from critics and audiences for its honest but unique portrayal of World War I. The film centers around two young British soldiers who are tasked with a daunting mission: run across No Man’s Land, dodge heavy fire and evade booby-trapped trenches to hand-deliver a message that will save hundreds of men from an ambush. The message must be delivered by dawn to have any hope of preventing a massacre.

It may seem like a work of historical fiction, but the journey is based off a story that director Sam Mendes’ grandfather told him about his own time serving in the war. Stories of messengers and their impossible feats of bravery were not uncommon in the First World War, since communication lines were frequently damaged in battle and the only way of getting an important message across enemy lines was to have a runner deliver it.

I won’t spoil the movie for you by telling you the fate of the two soldiers and their message, but I will tell you about someone else, whose story is so similar, it’s a bit eerie.

Harry W Brown was born in Gananoque, Ontario, and on August 18th, 1916, aged 18 years old, enlisted in the Canadian Expeditionary Forces. He was assigned to the 10th Battalion in the Canadian Infantry (Alberta Regiment)[1]. He was sent to France where his battalion fought four divisions of the German 6th army on the outskirts of Nord-Pas-De-Calais in the Battle of Hill 70.

The Battle of Hill 70 saw fierce fighting and Private Brown’s division was facing a counterattack after enemy forces exposed the right flank of the division to heavy barrage. Communication lines had been cut, and the situation was becoming increasingly dour. The 10th Battalion needed help, and Private Brown and one other brave soldier volunteered to get a message requesting re-enforcements to Headquarters.

The two soldiers moved across contested land under constant bombardment from artillery and mustard gas attacks. The other unnamed soldier was killed in the crossing, and Private Brown sustained a blow that shattered his arm. Determined to deliver the message, he continued his journey and arrived at Headquarters critically injured. According to first-hand accounts recorded in The London Gazette (archived excerpt featured below), he handed his message over and said “important message!” then collapsed unconscious.

On August 17th, 1917, almost a year to the day of his enlistment, Private Harry W Brown died of his injuries. His message is credited with saving not only the battalion’s position, but countless men too[2]. He was awarded the Victoria Cross for his actions and is remembered for his bravery and sacrifice.

The two soldiers depicted in Sam Mendes’ 1917 may seem like fictional characters showing inhuman bravery to save others, but their story is Private Harry W Brown’s story and his unnamed companion’s story, and countless other men whose story is the same but untold. 1917 and other films like it give narrative shape to these stories and expose previously little talked about facets of the First World War, like the role of the battalion runner. For more information on the Battle of Hill 70, please visit our Online Exhibit.

This blog post was contributed by Caitlyn Gribbons. Caitlyn Gribbons is a Master of Information Studies Candidate at McGill University. She specializes in digital collections and archives. 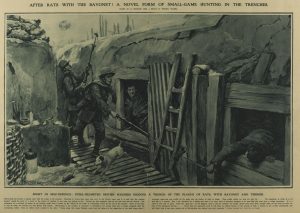